Mothers as Martyrs: The Mother of the Maccabees Among Jews and Christians 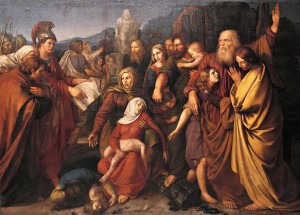 Tessa Rajak, the 2013 Visiting Croghan Bicentennial Professor in Classics at Williams College, will present the first of two lectures, “Mothers as Martyrs: The Mother of the Maccabees Among Jews and Christians.” All are welcome, this lecture is free and open to the public.

According to Jewish legend, the Greek monarch Antiochus Epiphanes, persecutor of the Maccabees, was defied by a mother and her seven sons, along with a brave priest. The mother’s heroic role, in urging her sons on to a willing death, is astonishing and disturbing.

This lecture will first explore this striking portrayal in its context, and then turn to its sequel: the takeover of the mother by Christian martyrologies and her transformation into a saint.

The Croghan Bicentennial Professorship was established by John and Rosemary Croghan for a visiting professor who would offer one course in Judaism and/or Christianity, in addition to giving public lectures.

This event is sponsored by The Croghan Bicentennial Professorship Fund and The Classics Department.