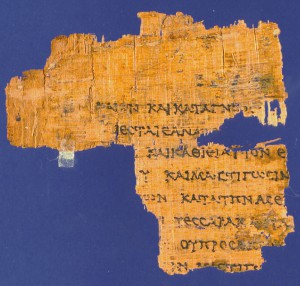 A Greek version of the Torah was commissioned, according to legend, for the great Library of Alexandria. It is often forgotten that the Jewish community were the ‘owners’ of the great translation. The lecture will illustrate how it served as an indispensable bridge for them between their own linguistic culture and the language of empire. What is more, subsequent generations of Greek-speaking Jews added to the translation, exploiting the same Hebraized language, and building upon it a Bible-centered literature that preserved their diaspora identities over many centuries.

The Croghan Bicentennial Professorship was established by John and Rosemary Croghan for a visiting professor who would offer one course in Judaism and/or Christianity, in addition to giving public lectures.

This event is sponsored by The Croghan Bicentennial Professorship and The Classics Department.

Mothers as Martyrs: The Mother of the Maccabees Among Jews and Christians
Summer Internships at the Smithsonian’s National Museum of American History, March 1 Deadline
Classics MENU