Cicero and the Library of Lucullus 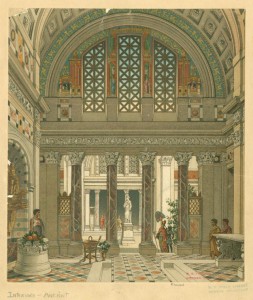 Stephanie Ann Frampton, Assistant Professor of Classical Literature at MIT, presented “A Stoic in the Library: Cicero and the Villa Library of Lucullus,” an investigation of the cultural status of libraries in ancient Rome in the late Republican period, before the development of more familiar imperial and “public” libraries. Frampton examined the fictionalized encounter between Cicero and Cato the Younger in the villa library of Lucullus at Tusculum (De finibus 3-4), a scene that has often been used to explain how libraries and books were used in by intellectuals in this period.